Is Atlantis mentioned in the Inferno of the Divine Comedy? 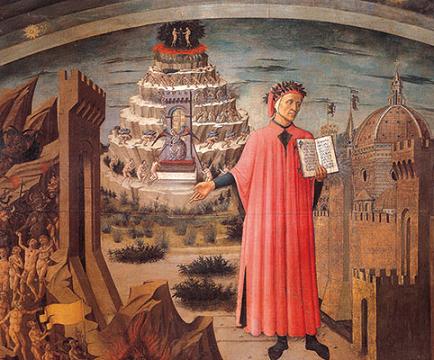 The works of Dante, especially the "Divina Commedia", the "Divine Comedy", enjoy a great popularity worldwide. One of the reasons for this are the many allusions and intimations Dante incorporated in the Divine Comedy. Many are dedicated to the task to decipher them. There is almost no topic on which Dante did not say anything. The secondary literature is extremely rich and in part even bizarre. It is no coincidence that Dan Brown bases his new bestseller "Inferno" on Dante's Divine Comedy.

However, the question of Plato's Atlantis in the works of the Florentine Dante Alighieri seems to be unanalyzed, yet. This is strange since Dante talks at length about geographical questions on the background of an ancient world view.

It is no question that Dante was familiar with Plato's Timaeus. More than once he recalls thoughts of this work, partially by explicitly mentioning the Timaeus as the source, such as in Paradiso IV 49 or in Convivio III 5.

Yet, it has to be noted that Plato did not know Plato's dialogue in the original language. Either he knew the Latin translation of Calcidius or he knew it only indirectly by the works of Augustine or Albertus Magnus (Ruud (2008) p. 183). 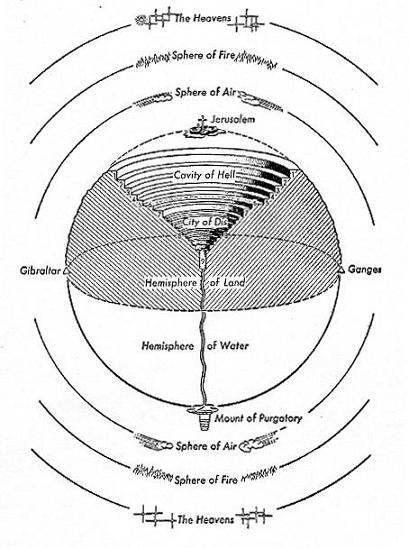 Pic. 2: The world view in the Divine Comedy

This means that the earth is considered to be a sphere. The landmass concentrates on the northern hemisphere where it lays like a band around the globe. But this band is no closed ring; it is interrupted by the sea. The two ends of the crescent-shaped landmass are in the West the Pillars of Hercules and in the East the estuary of river Ganges. On the southern hemisphere Dante knows only of sea, except Mount Purgatory of the Divine Comedy.

Contrary to the modern mistake of the 19th century that Aristotle spoke out against the existence of Atlantis, Aristotle was silent on this topic resp. he even showed a certain inclination to consider the Atlantis account to be true (Franke (2010/2012)).

Inferno: Of submerging and emerging landmasses

Like a comet Lucifer allegedly crashed onto the earth and all land on the southern hemisphere submerged, and emerged again on the northern hemisphere.

Is this an allusion to Plato's Atlantis? A comet falling onto earth (maybe Phaeton?!), landmasses submerge ...  but no! It does not fit: While Plato's Atlantis stays submerged permanently, the landmasses in Dante's work emerge again. Furthermore, these are no northern landmasses between the Pillars of Hercules and India but southern landmasses. Third, in Dante's work Phaeton never occurs as falling comet but is interpreted as burning sun, as we soon will see. And also in Plato's work, Phaeton is no comet.

Many Atlantis hypotheses are based on the conviction that the myth of Phaeton at the beginning of the Atlantis account is a hint to a comet's impact which mad Atlantis submerge. The myth of Phaeton is mentioned several times in Dante's Divine Comedy (Inferno XVII 106 f.; Purgatorio IV 71 f.; Paradiso XXXI 124 f.).

But Phaeton's fall is no topic for Dante. He always talks only of the burns caused by Phaeton. This by the way is the case in Plato's version, too, why those Atlantis hypotheses have a total lack of basis. Probably Dante knew the myth of Phaeton not directly from Plato's Timaeus but rather from Ovid's metamorphoses?

In Dante's Divine Comedy there are numerous ring structures in hell, purgatory and heaven. Yet these ideas have clearly other sources than Plato's Atlantis account. Nothing fits: The number of circles, their order, their function, etc. Only by force one could see a correspondance, here.

This is valid, too, for the three rivers in hell (Acheron, Styx, Phlegeton) and the hell's city Dis which in no way can be linked with the three water circles of the Atlantis city center. It would be purely arbitrary. There is by the way a fourth river in Dante's Inferno, the Cocytus. 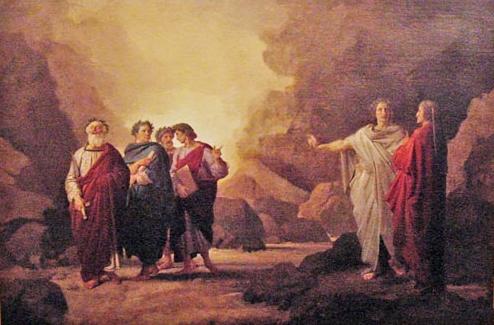 In Dante's work "De Monarchia" we seem to find something, finally: There, Dante writes about the sky holder Atlas as a "king" (De Monarchia II 3 11 ff.). Here, Dante refers to the poet Virgil (Aeneis VIII 134 ff.)  yet Virgil does not call Titan Atlas a "king". A king is only king Atlas of Atlantis in Plato's work, but not the sky holder and Titan Atlas who is well-known from Greek mythology. These two persons are not identical, but like many Dante seems not to have cared much to realize this difference. And thus  so it seems  we have a clear hint that Dante accepted Plato's Atlantis account as reality. In addition, king Atlas is located by Dante at the Atlas mountains in northwest Africa, and he even talks of "fortunate islands" which belong to Atlas' realms.

Yet, the appearance is deceptive. It is not a hint to Plato's Atlantis. The reason are Ovid's metamorphoses which were well-known to Dante. Already in Ovid's metamorphoses there is a depiction of Atlas as a ruler. This is an embellishment against the original meaning of the myth of Titan Atlas who is condemned to hold the sky, a distortion. (Metamorphosen IV 628 ff.). Dante probably got his depiction of Titan Atlas as "king" from Ovid. Thus, there remains no statement any more on Dante's opinion about Plato's Atlantis. For Dante Atlas could just be the king of the Atlas mountains without an additional big island.

The said "fortunate islands", too, are part of the western border of the inhabited world, as the Atlas mountains, and therefore they cannot be Atlantis. Meant are probably the Canaries. Dante's source for this is known: It is Paulus Orosius who does not talk of Atlantis (Historiarum adversum paganos libri VII: I 2,10).

An explicit statement by Dante against Atlantis?

In his work "Quaestio de aqua et terra" Dante analyzes why land elevates over sea and forms continents. He concludes that it only can be the sphere of the fixed stars which exercises such an influence on the land so that it is elevated. All other possibilities are excluded by Dante, neither the earth nor the water, nor air, nor fire, nor the planets' sphere. According to Dante the fixed stars a distributed differently in the north than in the south.

Decisive is Dante's answer on the question why the land does not elevate in a closed ring around the northern hemisphere of the earth, but is interrupted by the sea at the place where Plato located Atlantis (Quaestio de aqua et terra 21, other: 73):

This seems to be a clear statement against the existence of Atlantis: If there was not sufficient matter to fill the sea between the Pillars of Hercules and India fully or in part, then this means that this matter never was there. Thus, Atlantis could never have existed, the matter is missing, so it seems.

So there must have been  fully in the sense of Dante's argument  a single cause for this uneveness. After the uneven distribution of land had come into being the even influence of the sphere of the fixed stars preserved the uneven situation. But on this cause Dante is silent. He even does not present this problem but is conspicuously curt, here.

Why Dante was silent

It would be interesting to know what Dante, the famous medieval poet (1265-1321) and adherent of Aristotle, thought about Plato's Atlantis. Yet unfortunately Dante's opinion on Atlantis is nowhere expressed in a sufficiently clear way.

As we have seen this is mainly due to the fact that Dante did not rely on the original texts of Plato but on Latin texts, and only on that what others made of it. In the Middle Ages the accurate understanding of Plato's original Atlantis account was obviously buried under the views of the Bible, the Doctors of the Church, and the later Latin authors like Virigil or Ovid. These false views still live today in pseudo-scientific Atlantis searchers who rely credulously on the Bible or Ovid's mythology.

Another reason is the general disinterest of human beings in the Middle Ages in "earthly affairs". Furthermore, Atlantis was thought to be sunken and thus "unreachable". Atlantis became "reachable" only with the discovery of America which seemed to make at least a part of Plato's Atlantis account, the "opposite continent", a tangible reality. Yet maybe, Dante's reluctance is based on the fact that Dante like Aristotle is at a loss as how to deal with the Atlantis problem, and thus he preferred to stay silent? (vgl. Franke (2010/2012))

Be this as it may be, also the knowledge that we do not know is valuable knowledge.