Inspired by Wilhelm Brandenstein's 1951 book "Atlantis  Größe und Untergang eines geheimnisvollen Inselreiches" (i.e. 'Atlantis  Grandeur and Downfall of a mysterious island empire'), Massimo Pallottino published only one year later an article with the title "Atlantide"  "Atlantis" in the journal Archeologia Classica. It was Brandenstein's method to try an interpretation of Plato's Atlantis account which drew Pallottino's attention: Brandenstein interpreted the Atlantis account as a "legend" (German original: "Sage") in terms of literary studies, i.e. as an account with a true, historical core, which was enhanced by further partially mythical elements. 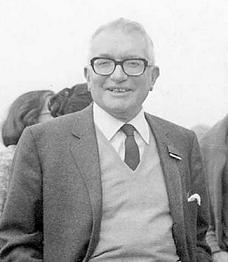 Pallottino saw in this approach a new and almost revolutionary method by which the opposition of "Romantics" and "Skeptics"  as Pallottino called them  could be overcome. For according to him, the question for Atlantis is still an open question. All attempts to interpret Atlantis historically or skeptically remained attempts.

For both sides Pallottino found clear words: He accused the Atlantis searchers to be credulous and pseudo-scientific dilettantes. However, he characterized the skepticism of "official science" (sic!) as being "arrogant", and he accused modern exegetes to be focused more on their own methodological postulates than on the fresh evidence of the ancient text. He reproached the public to have a downright "pathological" interest in Atlantis.

Pallottino considered these extremes to be definitively overcome by Brandenstein's academically valid method. "Skeptics" and "Romantics" would thus both be expelled off the realm of science.

Wilhelm Brandenstein saw two separate traditions converge in the Atlantis account: On the one hand side an Attic local tradition on the conflict between Athens and Crete on the hegemony in the Aegean sea. On the other hand side the Egyptian tradition on the Sea Peoples. Here, Pallottino especially criticizes the neglect of the aspect of the western location of the Atlantis island, as well as Brandenstein's opinion that the Sea Peoples tradition from Egypt could have contained no information on foreign peoples. 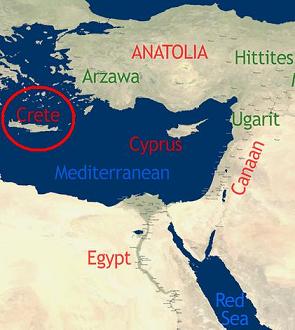 Pallottino's concept appears indeed to be much more complex than Brandenstein's result: In Pallottino's center there is first the tradition of a memory of a western island, which Pallottino explicitly points out to be Sicily. This tradition would be obvious in Homer's Scheria. This memory, though, was overlaid by two events: On the one hand side the decline of the Minoan civilization which lead to the confusion of the memory of the western island with the memory of the Minoan civilization. On the other hand side by the fact that later navigators could not find any more such an island, of course, which according to Pallottino lead to the myth of the island's submergence.

Pallottino shares the second and third tradition with Brandenstein's thesis: The local Attic tradition on the conflict between Athens and Crete on the naval hegemony in the Aegean sea, and then the Egyptian Sea Peoples tradition. The latter shows more content on the foreign peoples if comparing Pallottino with Brandenstein, but it has clearly less importance compared with the first tradition.

Other elements of the Atlantis account are not interpreted as historical cores by Pallottino but as additions and "coloratura". Among them the aspects Libya, Tartessos and Atlas. Furthermore, Pallottino interprets Plato's literary intention in the sense that the Atlantis war shall remind of the conflict of the Sicilian western Greeks with the Great Power Carthage.

For Atlantis research it is a stroke of luck that a globally leading and recognized archaeologist has taken the topic on board in a pleasently open way. That Pallottino considered the question of Atlantis to be an open question and put both Atlantis searchers and skeptics equally in their places is downright sensational.

It has fully to be agreed with Pallottino, too, that Wilhelm Brandenstein made an important contribution for a better interpretation of the Atlantis account. It is a merit that Pallottino agitated for more attention to this.

Unfortunately, Pallottino's interpretation for Atlantis is not convincing. It is a 'disimprovement' of Brandenstein's interpretation for Atlantis. In the first place it has of course to be criticized that the Egyptian tradition on the Sea Peoples is even more marginalized than in Brandenstein's case. Thus the chain of transmission stated in the Atlantis account itself becomes a side note. In truth, the Scheria tradition which is in the center of Pallottino's thesis was handed down to us rather independently from the tradition on the Sea Peoples and the Atlantis account, if it is related to Atlantis.

Furthermore, Pallottino's central tradition is amply opaque: The overlying of a memory to Sicily by a memory to the declined Minoan civilization on Crete, and thereby the emergence of a submergence myth because an island with such a culture does not exist any more, this is rather unlikely resp. almost abstruse.

Totally missing are considerations on a local Attic tradition related to the situation in primeval Athens itself. Yet, the conflict of Athens with Crete may have to do rather nothing with the Atlantis tradition. If however something of this was incorporated into the Atlantis account it would be a mistake by Plato. The threatening of the western Greeks by Carthage can nowhere be seen in the Atlantis account.

Atlantis not a real place

In case of Brandenstein it was possible to say that his view on Atlantis justifies indeed to talk of Atlantis as a real place: "His" Sea Peoples came from Crete, and "his" Athens fought with Crete. Thus, Crete was indeed Atlantis, according to Brandenstein.

Yet, in the case of Pallottino we are beyond the threshold of reality resp. fiction: Here, it makes no sense any more to talk of Atlantis as a real place. Though Sicily would be the background of the topos of the island in the west, yet according to Pallottino the Minoan civilization is missing on Sicily; elements of it became projected only from Crete to Sicily in the course of the emergence of the legend. The fight of Athens with Crete, too, is not related to Sicily but to Crete. The Sea Peoples in turn came from Sardinia and Illyria, according to Pallottino. Furthermore, according to Pallottino essential parts of the Atlantis account are not part of the historical core but additions, such as king Atlas.

Thus, according to Pallottino the origin of the Atlantis tradition is split to a wide variety of places. Therefore, it makes no sense to talk of Atlantis as a real place in case of Pallottino. It would be an error to call e.g. Crete, or Sicily, or Sardinia, or Illyria, or Libya Atlantis because of Pallottino. If once one of these places could be identified as Atlantis, Pallottino would be none of those who previously considered the place to be Atlantis. Because Pallottino did not consider any of these places to be Atlantis.

For Pallottino, Atlantis was not a real place but an errorneous combination and overlying of a wide variety of historical traditions, myths and mistakes. In this sense, Atlantis though would not have been an invention by Plato, but a mistake and a misunderstanding of the tradition and of Plato.

It remains the merit of Massimo Pallottino that he recognized and propagated Wilhelm Brandenstein's method. Yet Pallottino's result is even more dissatisfying than Brandenstein's. However, it carries heavy weight that an internationally renowned scientist with relevant expertise pointed out that the question of Atlantis is still an open question.

Franke (2006/2013): Thorwald C. Franke, A scientist in favour of Atlantis  Prof. Dr. Wilhelm Brandenstein and his contribution to Atlantis research, in: Mysteria3000 No. 2/2006; English 2013: http://www.atlantis-scout.de/atlantis_brandenstein_engl.htm