The Dark Side of Atlantis Scepticism

A forgotten Aspect of the Atlantis Question 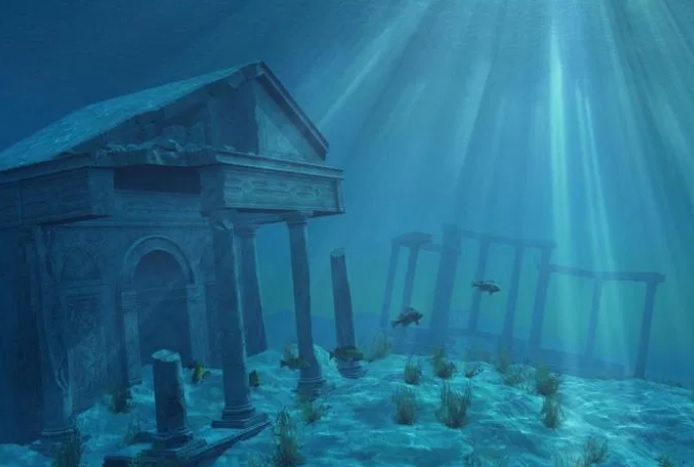 In our days, the interpretation of Platos Atlantis story as an invention of Plato is prevailing in academic scholarship. Atlantis scepticism is the choice of the bright side of life, so to say. Closely connected to the good feeling of being on the bright side is the depiction of Atlantis belief as dark and dangerous. Atlantis believers are considered crazy, and they even contributed to evil events in history: Wasn't there, at the transition from Antiquity to the Middle Ages, this strange Christian called Cosmas Indicopleustes who was a flat earther and who believed that the Atlantis story was a rewriting of the Bible? And didn't the Spanish Empire justify the conquest of America with Atlantis? And finally the Nazis, who saw in Atlantis the lost racially pure homeland of the Aryans, or?

But there is another side of the story. There is a dark side of Atlantis scepticism about which no one has told you. Until now.

It begins in the very first centuries after Plato. Their names are not known but from the beginning there were anti-Platonists, i.e. dissenters, enviers, and mockers who agitated against Platos philosophy. In their zeal they grasped at any straw to incite a smear campaign against Plato. For example, they accused Plato of having plagiarized his political theory from Egypt. In the line of this argument they also opined that the Atlantis story can only be an invention. It was this smear campaign, which made the brave Platonist Crantor traveling to Egypt where he allegedly found evidence for the reality of the Atlantis story. Thus, Atlantis scepticism was born from a smear campaign against Platos philosophy, that is against that philosophy which is the basis of our modern world with everything we cherish: rationality, humanism, science, you-name-it.

Then came the Christians. Or better: certain Christians. They believed in an age of the world of not more than 6,000 years, and when they compared this number to the alleged age of 9,000 years of Atlantis, they concluded that Atlantis must be an invention. The Platonists of the time  as the proponents of rationality and science  tried to argue against this superstition, most famously the philosopher Celsus. His arguments are preserved in the pamphlet Contra Celsum of the Christian philosopher Origenes. Here, we see Atlantis scepticism in the service of religious superstition.

In the Middle Ages, Atlantis belief started to flourish again, for example in the School of Chartres which was committed to Plato. Even an age of the world of 15,000 years was considered possible. But this came to an end in the 13th century. No, it was not that Plato had been replaced by Aristotle as the leading philosopher of the Middle Ages. Contrary to popular belief, Aristotle did not speak out against Atlantis: this is a collective error which evolved only at the beginning of the 19th century. It was something different. It was the tightening of the inquisition of the church which favoured Atlantis scepticism, again for the same reason as before: According to their interpretation of the Bible, the world had an age of only 6,000 years. Thus, Atlantis scepticism was closely connected to the horrors of the inquisition.

When Columbus discovered America, the Spanish were quick to claim the New World as their own, because a Spanish expedition had discovered it first. The right of the first discoverer was an established reason for colonial claims in these days. But speculations about Atlantis endangered these claims. Because if Atlantis once was a bridge to America, or if America itself was Atlantis, then the New World was known before Columbus' discovery, and the claims based on the right of the first discoverer would be meaningless. Therefore, the official Spanish historian of the Spanish conquest in the New World, Antonio de Herrera y Tordesillas, explicitly rejected the idea that America was Atlantis in 1601 and denigrated Atlantis as a fable. So did the official Spanish solicitor for America, Juan de Solórzano Pereira in 1629. And thus, Atlantis scepticism was pushed through as the official doctrine of the Spanish Empire in the service of colonialist claims.

With the end of the Middle Ages, rationality and science started to rise again, and scholars began to argue that the world is older than only 6,000 years. Among them was Isaac La Peyrère who dared to claim in 1655 that human beings lived even before Adam and Eve. One of his arguments was the age of Platos Atlantis of 9,000 years. His work was immediately condemned by the church and the author put to prison. Shortly after that, Isaac La Peyrère had to recant his opinion. Thus, Atlantis scepticism had triumphed once more.

In 1680, Carlos de Sigüenza argued that the American Indians should be treated as equal to Europeans because both Indians and Europeans descended from common ancestors in Atlantis. The Indians in the New World had also produced advanced civilisations that were not inferior to those in the Old World. As evidence, Sigüenza referred to the pyramids in both continents.  This hypothesis was guided by a clear humanistic impulse, and it was not pseudoscientific in its time, for science did not realise until much later that this hypothesis must be false. Nevertheless, Sigüenza is often portrayed by modern Atlantis sceptics as the prototype of a crackpot and pseudoscientist. Some even see him as a racist. In their zeal, these Atlantis sceptics completely overlook Sigüenzas humanistic impulse, and also that Sigüenza was not so wrong after all: for of course Europeans and Indians have common ancestors. Only that the common place of origin was not Atlantis. In this way, Atlantis scepticism obscures the legacy of a great humanist.

At the turn from the 18th to the 19th century, the first step was made to establish Atlantis scepticism in academic scholarship as the prevailing doctrine. Because until then, the opinions were divided. It were the so-called Göttingen Empiricists and Materialists who laid the foundation for academic Atlantis scepticism. Among them were scholars like Johann Georg Heinrich Feder, Christoph Meiners, or Michael Hißmann. What they all had in common was their tendency towards empiricism and materialism, and their rejection of rationalism and humanism, culminating in a ruthless Social Darwinism. This meant that they were clearly opposed to Plato and Platos philosophy. They were anti-Platonists, this is safe to say. These people were not the appropriate persons to interpret Plato correctly. Thus again, Atlantis scepticism was promoted in close connection to anti-Platonism.

In the middle of the 19th century, the German classical philologist Franz Susemihl finally pushed through Atlantis scepticism in German academia. He just claimed that there allegedly was a chain of tradition of Atlantis sceptics, beginning with the Göttingen Empiricists and Materialists, who had established Atlantis scepticism step-by-step. But this is not true. This was only his claim. And his own interpretation of Plato was deeply romantic. For him, Plato was not the founder of rationalism, but an artist and a poet who expressed himself in myths which always hide a secret. The romantic soul requires that secrets stay secrets and myths stay myths. Like the famous "blue flower" of the romance, Atlantis had to stay in the realm of myth and secret. The idea that Atlantis was a real place, was considered sacrilegious to romantic feelings. Thus, Atlantis scepticism was in the service of the anti-rational romance.

But unfortunately many modern Atlantis sceptics lump everything together. For them, it is enough to note the pseudoscientific nature of the thesis in order to conclude directly and without further ado that it has every conceivable racist motive. They see no difference between the racist Josiah Priest and e.g. John Thomas Short (... leads us to the truth that God 'hath made of one blood all nations of men.' ) or Ignatius Donnelly who was quite a progressive politician in his time. In this way, Atlantis scepticism once again paints a far too black picture of reality out of sheer zeal. Some radical Atlantis sceptics even go so far as to claim that the subject of Atlantis itself  regardless of context and perspective  is racist, in order to promote a radical left political agenda. In this way, it's now radical Atlantis scepticism itself which has begun to produce politically motivated pseudoscience, though the initial goal was to fight pseudoscience.

Finally, there were the Nazis, the late children of the romance, with a mindset closely resembling many ideas of the Göttingen Empiricists and Materialists. Everybody knows that Heinrich Himmler believed in a pseudoscientific Atlantis, among other crazy ideas. But Himmlers private pet theories did not represent National Socialism as such. While Adolf Hitler was in power, German classicists continued to declare Atlantis an invention in their publications. Even Nazi careerists like the philosopher Kurt Hildebrandt did so. Also the school curricula did not mention Atlantis. And then, Adolf Hitler held a speech in 1936 in which he mocked Atlantis believers in connection with the building project Böttcherstraße in the city of Bremen, which included a house Atlantis: We have nothing to do with those elements who know National Socialism only from hearsay and rumours and therefore confuse it only too easily with indefinable Nordic phrases, and who now begin their motif research in a legendary Atlantean culture area [kulturkreis]. National Socialism rejects this kind of 'Böttcherstrasse culture' in the strongest possible terms. The tape records the laughter of the National Socialist audience. Atlantis scepticism was more closely connected to National Socialism than you might have expected.

Today, there are popular science books and TV documentaries about Atlantis which draw heavily on the eerie fascination of connecting the Nazis with Atlantis. By creating the pseudoscientific fetish of an alleged Atlantis belief behind the Nazi ideology, these books and docus eclipse the real reasons for the crimes of National Socialism, which were, among others, a romantic anti-rationalism, a pseudoscientific biologism and a ruthless Social Darwinism. To misguide the audience concerning the true nature of National Socialism and the true reasons for its crimes is downright irresponsible, and this irresponsibility is closely connected with a radical Atlantis scepticism which loves to see the Nazis as Atlantis believers, though they were not.

What can we learn from this all? Surely not that Atlantis scepticism is wrong or that it should be condemned, only because it was and is abused for this or for that. What we can learn is that differentiation is always necessary and that nothing is self-evident. And maybe we can learn, that the idea of Atlantis as a real place is neither as dark nor as dumb as the usual sweeping judgements want us to believe. There always had been serious scholars assuming the reality of Platos Atlantis. Everybody heard e.g. about the hypothesis that the Minoan civilization could be Atlantis. Though wrong this may be, it is neither dumb nor is it dark. Without differentiation there is no rationality. And it is the rational method which makes us bright, not the opinions we have.

The author of this article is a private researcher without academic degrees in ancient philosophy, philology, archaeology, or history. He considers Platos Atlantis a real place, located in the Mediterranean Sea around the year 1200 BC.