Not improved but worsened; ignorance and nothing learned 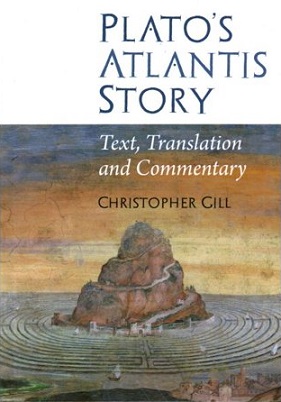 This booklet is based on a 1980 publication by Christopher Gill which has been now "improved". But it has not been improved. It has worsened.

As most contemporary scholars, Christopher Gill expresses the opinion that Plato's Atlantis story is an invention. Yet this opinion brings about certain difficulties and even self-contradictions. In this "improved" version, Gill gets even more ensnared in these problems than ever. Gill does not realize how he makes his own point of view more and more incredible by overtwisting the thesis into ludicrous consequences.

For example, in 1980 Gill boldly expressed the opinion that Aristotle spoke out explicitly against the existence of Plato's Atlantis; Gill even cited Aristotle literally! Now, Gill still states that "it looks" that Aristotle was skeptic about Plato's Atlantis and allegedly put it in line with Homer's Iliad. But where does Aristotle say this? And why does "it look" so? Where and why has the bold self-confidence from 1980 gone? Gill is silent, and some lines later he says that Aristotle did not talk about Atlantis at all. So, if Aristotle does not talk about the matter, how can he express an opinion about it? Furthermore, Gill rightly says that Aristotle mentions one detail of Plato's Atlantis story, the mud in front of the Straits of Gibraltar. This is true, but Aristotle mentions this mud affirmatively: So, where is the skepticism, now? Why can't Gill simply abandon the wrong idea that Aristotle spoke out against the existence of Atlantis? Why sticking so desperately to this groundless claim?

Why does Gill not mention the authors Harold A. Tarrant and Thorwald C. Franke about this question, neither where Gill discusses the topic nor in the bibliography? Harold A. Tarrant defends the idea that Aristotle spoke out against the existence of Plato's Atlantis, Thorwald C. Franke refutes it; see the literature below. Gill claims to have updated his booklet to the recent publications on the topic. Obviously he has not. We dare to ask the question: Why not?

Concerning the strange fact that Plato presents an allegedly invented story (about Atlantis) in the context of a most serious story (about cosmology), which is one of the many self-contradictions of the claim that Atlantis is an invention, Gill resorts to Sarah Broadie. Broadie defends the case by speculations about the characters of the dialogue, e.g. about Critias, "who is constructed as a contradiction that is unaware of itself" (read this twice to understand it fully), or who allegedly has no interest in philosophic truth and does not really believe in reason at all (usually, scholars such as Thomas A. Szlezak express the opinion that all characters in the Timaeus-Critias are philosophers in Plato's sense, as the dialogue itself states). In order to underpin her claims, Broadie sees irony and allusions turning around the corner of each half-sentence of Plato's Timaeus-Critias, thus reading many statements against their obvious sense. It is really not very convincing, yet Gill praises it as the most recent achievement. Loosing measure and overtwisting things is a clear sign of decadence, this is valid also for academic arguments.

Concerning the reception of Plato's Atlantis story, Gill still sticks to Vidal-Naquet's book about the topic. Yet this essayistic book is full of factual flaws and misleading allusions! Some of them are credulously repeated by Gill. Again, Gill did not update his booklet to recent publications: Thorwald C. Franke published a thorough analysis of the reception history of Plato's Atlantis story in 2016, correcting many factual mistakes made by Vidal-Naquet. You do not know where to start in order to count all mistakes in Gill's booklet in this area. It is so sad to read the same mistakes time and again.

In the appendix, Gill still shows the same wrong maps as in 1980. There is e.g. a map of the Greek world, described as "Hecataeus' World Map". Now, this map does not draw Libya as a smaller appendix to Asia, as did Hecataeus' map, but Libya is conspicously larger than the rest of Asia. (Correction: In a previous version of this review we stated that Hecataeus' map drew Europe, Libya and Asia all of the same size: Not true.) There is a strange emphasis on the western part of the world in this map. Yet the tin islands (British Isles) are missing although Hecataeus knew more about them than Herodotus in his time. Since the discussion is about an island in the Atlantic sea, this is an important detail. This map is not Hecataeus' map. At the same time, it cannot be Herodotus' map, because according to Herodotus, Europe is bigger than Asia and Libya put together. So whose map is it?! We have to conclude that such a map as presented by Gill did not exist in ancient Greece. Anyway, it would have been a better idea to present Herodotus' map instead of Hecataeus' map, since Herodotus is much closer to Plato. Also the provided depictions of the city and the plain of Atlantis are highly questionable. Also missing is a depiction of Plato's view of the world as a sphere, and not as a flat world.

How can we trust an author who fails in providing such basic information as e.g. which geographical views Plato had, when he wrote his Atlantis story? All adherents of the idea that Plato's Atlantis was an invention have to realize that the mistakes made by Gill (and others) sum up to a tremendous heap of errors which should lead to a very basic scrutiny: Is Plato's Atlantis really an invention? If you want to stick with this idea, you will have to do much homework.

We have to acknowledge the fact that most scholars currently stick to the idea that Plato's Atlantis is first and foremost an invention. This is legitimate. Yet Gill's recent booklet is a sad and typical example of so many academic publications which do not really spend much effort on the question, and argue lightheadedly as if this opinion does not really need to be defended. They even stick to arguments which over time were questioned among Atlantis skeptics themselves. So they overtwist their thesis by becoming ensnared in ever more ludicrous arguments. And they do not take into account, that there are alternative opinions which are legitimate, too, and have arguments on their side, too. This becomes obvious, when Gill discusses the search for Atlantis applying irony (e.g. writing 'find' always in quotation marks, why?) and omitting serious attempts of alternative explanations, e.g. the Sea Peoples hypothesis of Wilhelm von Christ from 1886.