Jean-Pierre Pätznick and the Egyptian Atlantis

The French egyptologist Jean-Pierre Pätznick (Paris-Sorbonne University, Paris IV) recently published an article about Plato's Atlantis in the French Egyptology magazine "Pharaon". This magazine offers articles by scientists to an interested public audience like the "Antike Welt" in Germany. This article is the result of several presentations he held before about the topic. 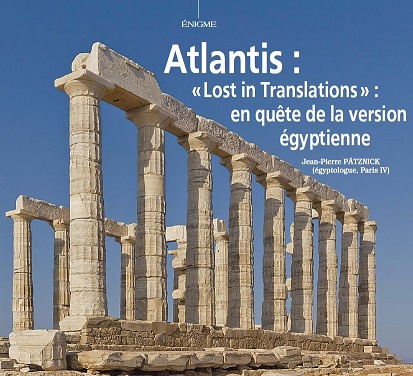 His approach is to ask for the Egyptian version of the Atlantis story. This is of course exactly the right question and we should expect new insights and some progress concerning the question of Atlantis from this approach. But unfortunately, the article is disappointing. First, the author repeats a lot of wide-spread mistakes, and even adds several more mistakes:

Concerning the identification of typical Egyptian phrases or topics, the article does provide almost no useful ideas:

Finally, the author is quickly jumping to Spain (or Morocco) as the only reasonable location:

We appreciate that an egyptologist approached the idea that Plato's Atlantis was not a pure invention. But the results of this attempt are too superficial and do not bring the expected progress. I dare to say that my own amateurial Egyptological studies will bring some more progress, in a coming publication.